Let's get out of this town…

The Night I Thought I Was Going To Die 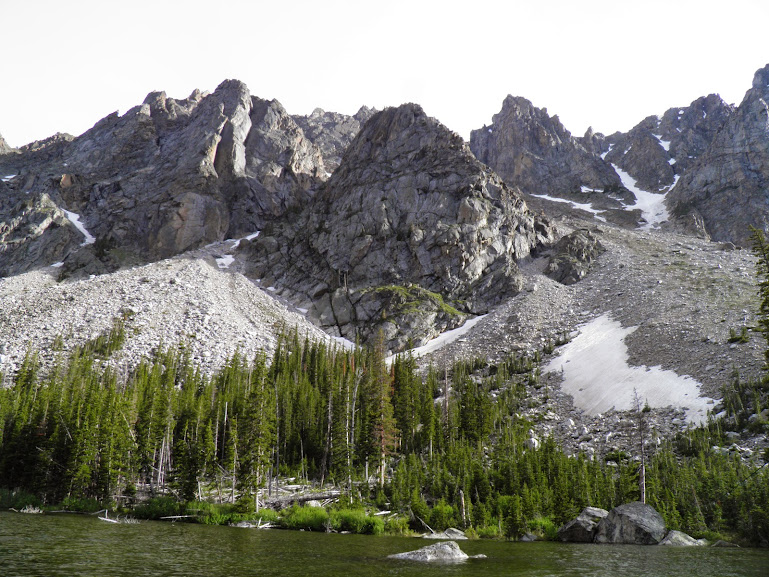 Summer of 2014 was a summer that completely got away from us. Our weekends were completely and impossibly booked and now I can’t even remember with what. Sadly, that meant that the 4th of July weekend was the only time that we could get away for a two night camping trip – a two night trip that turned into one.

It had been too long since we had been camping, let alone done any backpacking – something my body reminded me of as soon as we hit Lake Fork trail head just outside of Red Lodge. Since it was only the 3rd of July we had our fingers crossed that we could out distance any crowds and find a decent spot to make camp.

It isn’t a hard 5 miles up to Lost Lake, the trail is forest service made and mostly shaded. A little over halfway to Lost Lake is Broadwater ‘Lake’, which is just a wide spot in the creek, but it has a nice bank which makes it a good resting spot or picnic point if you don’t plan on going any farther. We kept going however, ready to see the lake we were really headed for. As we went the brewing storm clouds in the distance hurried us forward.

Thankfully the side trail to Lost is well marked and after a few more minutes we dropped down into the main campground by the lake. We headed left off the trail to see if there were any spots more remote as the thunder began to rumble through the sky, but there is nothing over there. So Jack took me back to the main camp and pulled out the tent’s rain fly and draped it over me and the gear while he and Bailey went the opposite direction. I hunkered down as rain began to fall. Thankfully Jack came back a few minutes later saying he found a good spot so we scooped our gear up and dashed over to it. We  were able to set up the tent and crawl in before the storm worsened.

Sadly, we did very little exploring, but we did find another great camping spot up to the trail  a little ways by an awesome swimming hole (not so great of a fishing hole though). But all plans to come back later that night and have a quiet little swim were abandoned when someone else – and his large German shepherd named Satan – took the spot. 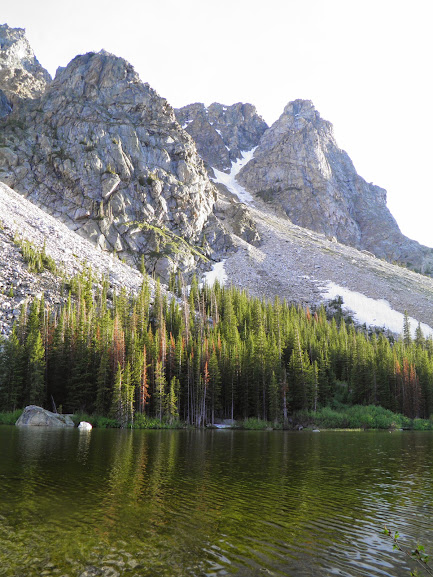 After a delicious dinner of steak, mashed potatoes, instant oatmeal and s’mores, Jack just stood looking across the lake. When I asked him what he was thinking about he said he wanted to see one of the large boulders in the rock field above us fall down the mountainside. Not too much later we heard one rumble down.

That’s when I remembered how my parents never liked to camp under the shadows of tall rocky mountains, but how could you not camp here? It was so beautiful.

We crawled into bed earlier than we usually would and zipped our sleeping bags together for room and body heat (a trick I discovered at Cliff Lake). The addition of a dog in a two person tent made getting comfortable a bit tricky.

I bolted awake, sitting upright with my flight response on high. The thundering sound echoing loud through the canyon woke all three of us at once. Without even thinking I knew it was the rocks tumbling down the mountainside. I froze and waited for the barrage of a landslide that would sound our end.

My breathing was heavy and quick as my body debated whether or not to fly out of the tent in a desperate escape through the forest in the dark.

“You okay? It probably wasn’t even that big. Go back to sleep.”

Reluctantly I laid back down, but I wiggled into my Underarmour leggings in case we had to run.

“What are you doing?” I knew Jack was trying to go back to sleep and all my moving was keeping him awake. “We can leave first thing in the morning. I promise.”

I glanced at my phone hoping it was 5 and that outside the sun was threatening to rise.

All I could think of was the Hebgen Earthquake of ’59 that buried campers when the side of a mountain crashed on top of them. The sounds of the wind ripping through the trees overhead did nothing to ease my nervousness as a snuggled back down, trying for an hour to convince myself that no more boulders were falling and that I would not die tonight.

The morning came early though since Bailey kept moving around too much for Jack to sleep, which meant that he in turn kept moving and waking me up.

I didn’t really. At least I wasn’t ready to end the trip, but relocating to another camping site sounded good to me at this point. Besides, we still had plans to hike the off trail route up to Black Canyon Lake which sits above the treeline of the mountains. As soon as we stepped out of the tent however, we realized the still blowing wind was bringing dark clouds over the mountain tops above us.

Since the unexpected change in weather meant that it would be sheer foolishness to hike out of the protection of the trees and onto the exposed rocks during a lightning storm, all that was left for us to do was to pack up our gear and head back down the trail ahead of the storm.

If you’re interested in doing this trip (better hopefully) than here’s what you need to know!

Back in July we met up with some great friends of ours, Chaney & Lashae and their daughter Maubry for a day of driving around the Montana/Wyoming mountains.

We climbed up the Beartooth Pass, a tight winding highway up the side of the mountains above Red Lodge, Montana.

When we got out at the top to stretch we were lucky enough to see some amazing wildlife up close and personal.

We stopped for a picnic lunch at a campground outside of Cooke City. After throwing our garbage away we started to leave the campground when we noticed the campground host standing in the middle of the road watching us and looking down at a piece of paper. We stopped to see what was going on and apparently after we left the camping site he went and found someone else’s trash in the bear proof box and accused us of leaving it.  He threatened to send us a ticket despite Jack trying to reason with him – thankfully we never did get a fine in the mail. Even though being falsely accused didn’t make us want to ever use that campground in the future, it is important to be good stewards of the land and also to just be safe by not leaving trash and especially trash that smells like food lying around.

As we headed down into Wyoming we began climbing another, smaller pass.

At the top is a lookout over the valley below and on the lookout are many tiny little chipmunks that have apparently been fed because they are quite fond of humans. Maubry was also quite fascinated with them.

Even though the drive up or down the Beartooth Pass can be somewhat daunting, for the explorer the great view, the great country and the great time are all well worth it!

The beginning of this February was extremely cold in Montana, with temperatures dropping all the way down to 30 F below zero. It has been ridiculous. Jack & I talked about getting away to somewhere warmer for Valentines Day,  but since neither of us are very patient and the weather was due to warm up we decided to go to our favorite hot springs in White Sulphur, Montana a week ahead of time.

So Friday night after work we headed off, just grabbing some fast food because we would already be arriving late. I couldn’t complain about it though because I love traveling at night. Thankfully, the roads weren’t too icy and the drove was mostly uneventful. That is until were were in the middle of a rather intense conversation and Jack looked over at me for a split second and I simultaneously looked up at the road.

Looking back now it was silly. Obviously something that large and dark colored couldn’t be a deer, but my mind didn’t process that we were about to hit an elk.

I squeezed my eyes shut and felt the grab of the seat belt as Jack hit the brakes. I thought that there was no way that we were going to miss it and I waited for the impact. But it never came. When I looked up there was no sign of the elk anywhere. Jack (who thankfully has the presence of mind to keep his eyes open while avoiding elk) said he saw it slip on the ice for a split second before it disappeared on the side of the road. I spent the next few minutes to White Sulphur in tears, nearly hyperventilating from the sudden shock.

By the time we threw our bags into our room I was composed and thoughts of the elk disappeared as we quickly changed and made our way towards the pools. I was pleasantly surprised at how amazing it felt. The cold night and the steaming hot pools (which are kept at temperatures ranging from 98-105 degrees depending on the pool) blended almost perfectly to be a comfortable temperature. Between the darkness and the heavy steam rising around us, it was nearly impossible to see others, so it felt like we had complete privacy.

The next morning when went back out, it was even colder at zero degrees. If anything wet was out of the water for any period of time would freeze solid. That is why smart people left their shoes and other clothing items right inside the door instead of leaving them poolside like we did. That is also how Jack turned into Jack Frost.

Overall, the stay was very relaxing. We would definitely recommend that if you go in the winter to stay in a room close to the pool because the motel part is a long, cold walk away. We stayed in the new part of the hotel and we were very impressed with the large rooms and comfortable beds. My only complaint was that the walls and floors seemed thin and we could hear the guy two doors down repeatedly blowing his nose. So make sure you get a room that isn’t on the pool side if you are an early sleeper.

The water is supposed to be full of healthy minerals and I have heard people swear that constant exposure will even make warts go away. My skin and hair was incredibly soft the next morning and as always I left wishing that there was a way I could have constant access to the water there.